KUR RUNS FOR MELANOMA: Running For a Good Cause

Our Director Kevin is running for a good cause Sunday, November 4th!

KUR RUNS FOR MELANOMA: KUR SKIN LAB Director, Kevin, is running this Sunday to show his support of melanoma carriers. He’s partnered up with the Jack H. Marston II Melanoma Fund in efforts to spread awareness. This is a 26.2 mile marathon! – and we’ll be supporting him every step of way. Kevin has been running marathons to support good causes! Any money raised by Kevin is going directly to research, awareness and healing of melanoma. Let’s wish Kevin good luck on his marathon! 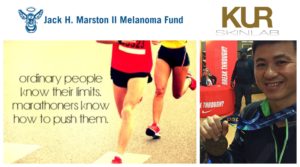 For more information about the Jack H. Marston II Melanoma Fund click on the hyperlink or the picture below to learn more.

Melanoma is a type of skin cancer that is formed when un-repaired DNA damaged to skin cells, usually caused by intense UV exposure or sun damage, trigger mutations that leads skin cells to multiply quickly and form tumors. Theres tumors are formed in the melanocytes that produce pigment which live in the basal layer of the epidermis. Some of the melanomas develop from moles and are usually black or brown, but they can also be skin colored, purple, pink, blue, white or red. It is predicted that there will be over 178,000 cases of melanoma diagnosed in 2018.  If melanoma is recognized and treated early, it is always curable. While it is not the most common, it does cause the most deaths; it kills an estimated 9,320 people in the US alone – 5,990 men and 3,330 women. (SOURCE: skincancer.org)